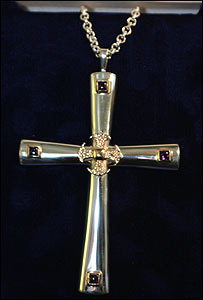 Various reports concerning the inauguration of the new pope yesterday and his meeting today with ecumenical leaders including an Anglican delegation that included two ECUSA bishops as well as several prominent Anglican conservatives.

The Times
Richard Owen New Pope seeks a spiritual revival as he takes the throne
Ruth Gledhill Words of inspiration not lost in translation
Addition
Richard Owen Pope prayed: ‘God, don’t do this to me’

And for a different perspective, Appointment of Pope Benedict sits uneasily with Arabs on Aljazeera.com

Update
An earlier column that I missed: Andrew Brown on opendemocracy.org Cardinal Chernenko?

re +Rowan meeting benedict XVI – I was saddened as I watched the meeting on BBC News (and then rewound it and watched again through Sky+) – +Rowan seemed to be very pleased to be there with his presents and looked as if he was going to give the Pope a fraternal kiss – this was firmly kept away at arm’s length. I don’t think the Pope thinks nearly as much about unity with Anglicans as he does with Eastern churches. I hope we won’t sacrifice our principles and how we perceive the Gospel to be to try to get… Read more »

Principles? From Rowan Williams? He has displayed since his taking of the AofC post that his only principles are personal expediency and unity at all costs.

I have no time for him any more.

“his only principles are personal expediency and unity at all costs.”

Is that a Christlike comment to make? Very easy to judge when one does not have the conflicting pressures. And doesn’t the Bible say something about judging others?

Merseymike, your comment on the Archbishop seems rather unkind. I wouldn’t like his job for a moment, and I wonder whether he too sometimes wishes he had not been appointed! By the way, I looked at your blogspot. Both terms “liberal” and conservative” are, I suppose, relative to one’s own position; I could be labeled liberal by some and conservative by others! I say that because I was quite taken aback by the heading in your blogspot which reads: “Comments from conservative evangelical bigots not welcome. Piss off: you have quite enough of the web already…” Whatever label one ecognises… Read more »

Interesting! I think there’s a parallel between the Archbishop of Canterbury and the Pope.

Ian, if only the rest of the church had the decency to think about its actions in advance, asking itself exactly those questions, “is this Christlike? am I about to judge someone?”!

One of the notable benefits of asking these things is that the media would never latch onto a rightwing-versus-liberal separation, because people would have the decency not to judge others in public without applying Scriptural principles first.

Still, I suppose Merseymike is entitled to his view…