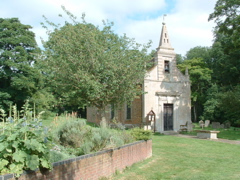 A couple of weeks ago, I visited Little Gidding. Not for the first time, and not, I hope, for the last, either. But it was the first time I had been in about five years, so it was good to be back.

A long time before, back in 1993, at the dawn of the popular internet, I wrote a piece about a visit to Little Gidding for an Anglican email list. (You can read a copy of that piece here.) At that time Little Gidding was the home of a small community, as well as a wider group of Friends, but in the intervening years the community disbanded and there was some dispute over the future ownership of the community buildings. But now the dispute has been settled, the Friends of Little Gidding have been reconstituted, new wardens installed in Ferrar House, and the ministry of hospitality continues.

So, on a lovely Sunday afternoon we headed up the A14, across the A1, turning off at Leighton Bromswold (to pay homage to George Herbert) and on to Little Gidding. The ‘dull facade’ looked almost beautiful in the late afternoon sun, the noticeboard (new since our last visit) slightly detracting from the composition. Inside, the sun shone brightly through the clear glass and the stained glass of the windows, and the old familiar place looked just the same. This is the place where the Ferrar family, led by Deacon Nicholas, came to say their prayers, morning and evening each day, the centre of their spiritual life. This is the place, hallowed by their community, where ‘prayer has been valid’, this is the place closest to us, now and in England.

Nicholas Ferrar lived in a time of increasing prosperity, with the foundations being laid for the later British commercial and imperial greatness. Ferrar himself came from a wealthy mercantile family, involved in foreign trade and the settlement of English colonies in North America.

It was also a time of religious turmoil in England. Just five years before his birth an attempted invasion by a foreign power aiming to overthrow Queen Elizabeth I and her protestant government had been foiled by a combination of the heroics of Sir Francis Drake and the stormy weather. When Ferrar was 12 a conspiracy to blow up the Houses of Parliament and to kill the king and his government was only narrowly averted, thanks to careful intelligence and leaks from the inside. And not long after his death England erupted into civil war.

Ferrar’s response to this, like that of his contemporary George Herbert, was to live a quiet and godly life. He abandoned the pursuit of worldly wealth and status for a life of prayer and contemplation, in a community of family and other associates. But this was not escapism. Rather, it was an engagement in real life, an engagement with ordinary people and their everyday concerns, as a teacher, as a healer (Ferrar had studied medicine at Cambridge, Padua and Leipzig), as a counsellor. He and his community were consulted by the poor, by the politically active, and by the great and the good — right up to the king himself.

Although Nicholas Ferrar died in his 40s on 4 December 1637 and his community survived only another decade before it was ransacked by the victorious Puritans, and dissolved a further decade later at the death of Nicholas’s eldest brother John, his example still shines as a beacon of sanity in a complex and sometimes frightening world. A life of caring for ordinary people, of ministering to their needs, physical, intellectual and spiritual, a life of quiet, undemonstrative prayer and study, is one that we would all do well to emulate. ‘It is the right, good old way you are in,’ Nicholas Ferrar said to his brother, shortly before he died; ‘keep in it.’

I’m hoping to get there sometime, myself.