General Synod: Membership of Organisations which contradict the duty to promote race equality

on Tuesday, 10 February 2009 at 4.30 pm by Peter Owen
categorised as Church of England, General Synod

Updated Thursday to add the voting figures on one amendment.

This afternoon General Synod debated a private member’s motion about membership of organisations which contradict the duty to promote race equality. It was proposed by Ms Vasantha Gnanadoss of the diocese of Southwark. This is her motion:

That this Synod, noting that in 2004 the Association of Chief Police Officers adopted a policy whereby

“no member of the Police Service, whether police officer or police staff, may be a member of an organization whose constitution, aims, objectives or pronouncements contradict the general duty to promote race equality” and “this specifically includes the British National Party”,

request the House of Bishops to formulate and implement a comparable policy for the Church of England, to apply to clergy, ordinands, and such employed lay persons as have duties that require them to represent or speak on behalf of the Church.

The motion was carried by 322 votes to 13 with 20 recorded abstentions. 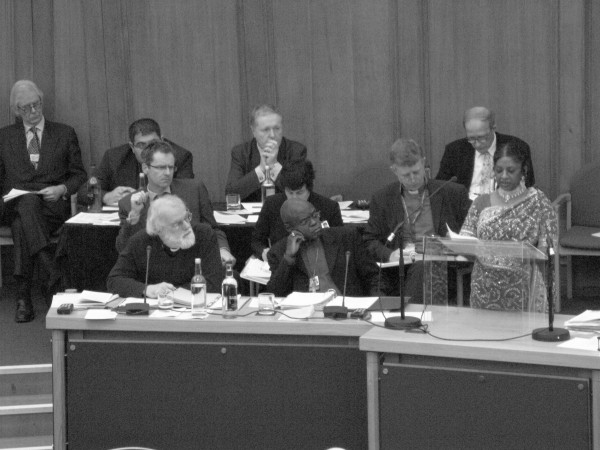 During the debate three amendments were moved but all were defeated.

Leave out all the words after “That this Synod” and insert “affirm that membership of any organisation whose constitution, aims, objectives or pronouncements contradict the promotion of race equality is incompatible with the Apostolic Christian faith.”.

For the words “noting that in 2004” to “British National Party” substitute “recognising that every human being is made in the image of God”.
Leave out “comparable”; and
At the end insert “, which makes clear that racism has no place in the life of the Church.”.

Leave out “clergy, ordinands, and such employed lay persons as have duties that” and insert “persons whose duties”.

The voting on Tim Hind’s amendment was 166 in favour, 177 against and 11 recorded abstentions. The other two amendments were each defeated on a show of hands.

Leave out all the words after “That this Synod” and insert “affirm that membership of any organisation whose constitution, aims, objectives or pronouncements contradict the promotion of race equality is compatible with the Apostolic Christian faith.”.

Did he really use the word “compatible” rather than “incompatible” or is this a typo?

Sorry, our mistake, being corrected now.

It is necessary to begin with a disclaimer – I am not now, never have been, and never will be, a member of the BNP. I am, however. a libertarian, and I regard this motion as thoroughly illiberal and theologically appalling. The motion tells BNP members that they are, because of their political beliefs, to be excluded from the church. It is a vile message, in effect saying, ‘You are so great sinners that you are to be denied the ministrations of the church’. The CofE has invented a new category of sin. In addition to venial sins and mortal… Read more »

Why can the C of E not simply take a stand against discrimination, full stop (i.e. on the basis of e.g. gender, sexual orientation, etc. as well as race)? It’s no more than what all other employers in Britain have already been doing to follow the requirements of the law, after all…

I find it rather sad that such a ban needed to be enforced upon Church of England clergy. I would have thought that candidates for ordination would have been vetted for their possible racial discrimination tendencies; denying the grace of Holy Orders to anyone discriminating against ethnic, gender or sexual orientation differences. Let’s wait and see how the rest of General Synod goes on these important issues.

Surely, Paul R. in some respects the one is as bad as the other ;=)

Nor is it a new sin, if one doesn’t count Byzation and the Crusades as novel?

AS a paid up Guardian reader, I’m not happy with this. Surely it could have been dealt with under ‘conduct unbecoming’? Plenty of other things which are not illegal but are contrary to Christian belief (eg being found in bed with the wrong person/species) are dealt with via that route.

David Rowett asks why BNP membership could not have been dealt with under “conduct unbecoming”. The answer is that when the CDM was framed it included a clause stating that membership of a political party couild not be used as grounds for proceedings. At the time CDM was being prepared there was a great fear of catch all mechanisms that clergy would easily fall foul of, and this clause was to prevent scurrillous proceedings against members of all parties that the complainant disagreed with. In practice we have found CDM to have a high initial bar that weeds out such… Read more »

“The motion tells BNP members that they are, because of their political beliefs, to be excluded from the church.” But those “political beliefs” are that some humans are superior to others and have rights and priveleges that are denied to others. This is not merely a political belief, this is a direct refutation of one of the basics of the Christian faith, that all humans are loved equally by God, regardless of what they are, what they do, where they come from or anything else. God loves us all equally. Period. Where is there room in the Church for those… Read more »

Re: +David’s comment on the CDM – does that mean that the political parties clause might be removed as the simplest way of enacting the mind of Synod?

A Christian in Yorkshire

Is Vasantha Gnanadoss a Christian or is she just a anti racial activist?