on Monday, 9 December 2013 at 8.41 pm by Peter Owen
categorised as Church of England, General Synod

The eight elected senior women clergy are attending their first meeting of the House of Bishops this week. The Church of England issued this press release to mark the occasion.

The House of Bishops of the Church of England has today welcomed eight women as participant observers to its meetings. The welcome follows the election of the eight senior women clergy from regions across the country.

In February of this year the House decided that until such time as there are six female members of the House, following the admission of women to the episcopate, a number of senior women clergy should be given the right to attend and speak at meetings of the House as participant observers. The necessary change to the House’s Standing Orders was made in May.

Elections for the eight senior women clergy were held in autumn of this year and the following were elected:

Having taken up their role on 1st December, the two day meeting of the House of Bishops in York on December 9-10 will be the first meeting at which the participant observers will attend. 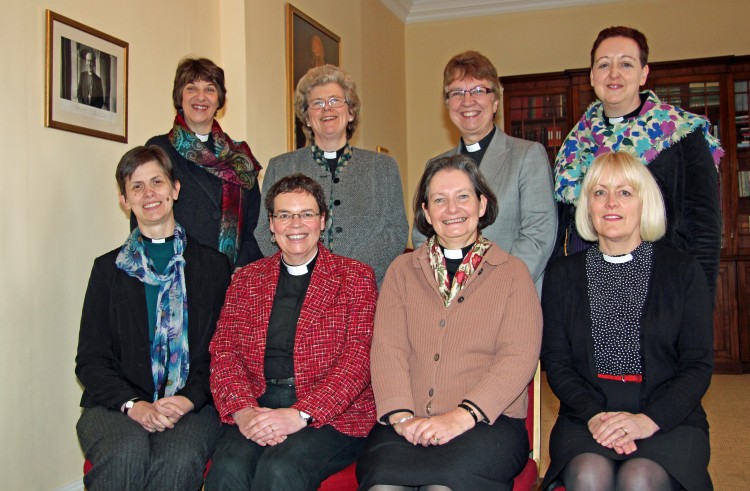 There is a larger version of the photograph here.

A picture on TA!
My goodness there is a God!

A very small step forward. ‘Participant observers’. No votes and no one needs to take any notice of what they say

So, from this picture, it won’t be only the male bishops wearing the trousers – from today onwards!

Just a small step for the H.o.B., but a huge step for Woman-Kind.

But they all seem to be white.

So it’s just as well, Richard, that we do very little voting and a great deal of listening.

And it was such a good day that we even finished half an hour early.

Yes, David, in matters like this I am a cynic. i await with interest evidence that their presence makes any difference.

In my experience, the presence of women in a formerly all-male group always makes a difference – a big difference – which is why it is important. This is a very welcome step, and it was, after all, the best that could be done in the period between the rejection of the women bishops legislation last year and the acceptance of new legislation (as most of us hope) in the near future.

Good point, Martin – a picture makes all the difference !

It was great to have them there. They played a full part, and I kind of hope that our culture is becoming more human and less boys public school. The voting thing is less significant than it might appear, since we vote formally very rarely, and there are quite a few bishops there who are deputising in diocesan vacancies and they don’t get a vote either; it’s only those who are part of the General Synod House of Bishops (ex officio or elected) who have a vote. Talking to three or four of them afterwards, their experience of it was… Read more »

“It was great to have them there. They played a full part, and I kind of hope that our culture is becoming more human and less boys public school.”

It’s good to have at least one Bishop in the Church of England admitting that having women in the mix is ‘More human, and less ‘public School’. That really needed to be said in the present circumstances. Let’s hope that this will also be the end of public school nepotism in the House of Bishops in the C. of E.

Ron Smith: Well, if the CofE ever wants to start electing its bishops …

Good to hear Pete Broadbent’s positive report. Following on from this creative approach, the House of Bishops could invite along appropriately qualified LGBT clergy as Participant Observers, at least for its upcoming discussions of human sexuality.

Let’s hope that this will also be the end of public school nepotism in the House of Bishops in the C. of E.

Do we know how many of the above mentioned women were public school girls?