on Monday, 17 November 2014 at 4.11 pm by Peter Owen
categorised as Church of England, General Synod 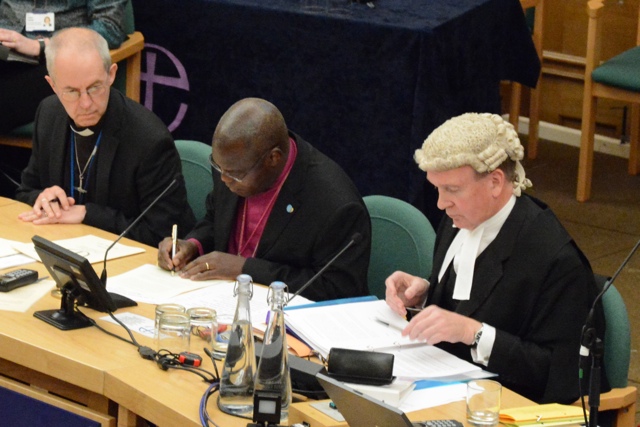 The Archbishop of York signs the Instrument of Enanactment.

The General Synod has today enacted the measure enabling women to be ordained as Bishops in the Church of England.

The formal enactment of the legislation – Amending Canon 33 – followed the vote on final approval by the Synod at its meeting in July of this year. Since that time the legislation has been approved in Parliament and received Royal Assent.

The final legislative requirements took place during a session chaired by the Archbishop of York, Dr. John Sentamu, on the first day of the Synod’s meeting in London.

With the Instrument of Enactment having been read to Synod the motion was put without debate, with only a simple majority required for approval. Following the item being passed the legislation was signed into law by the Archbishops of Canterbury and York before the whole Synod.

Following the vote Justin Welby, the Archbishop of Canterbury, said:

“Today we can begin to embrace a new way of being the church and moving forward together. We will also continue to seek the flourishing of the church of those who disagree.”

The following dioceses are currently vacant and are waiting to appoint a diocesan bishop:

Southwell & Nottingham
Gloucester
Oxford
Newcastle
The Diocese of St Edmundsbury and Ipswich were the last diocese to select a Bishop under the former rules.

The following suffragan (assistant) bishop posts are currently Vacant and are awaiting appointment:

Dunwich
Hertford
Hull
Plymouth
Stockport
Any of the above vacant posts may now be filled by a male or female priest.

After the vote the Archbishop of Canterbury confirmed that the CNC for Southwell & Nottingham (which has had its first, but not second meeting) had been allowed to consider women.

At last! In 1965 in the old Church Assembly the issue of women priests and bishops was raised and defeated.Slowly and steadily those of us in favour pressed on. 25 years ago , the day the Berlin Wall came down, Synod gave Provisional Approval to a Measure legislating for women priests. This was finally approved in 1992. The first women were made priest in 1994. Now 20 years later and 25 years after the Wall came down we have full approval of women bishops! No one can say the Church of England does things in a rush! Many of the… Read more »

It will be interesting to know (and in the interests of openness and transparency that are supposed to accompany appointments these days we ought to know) where each diocesan bishop has got to in the process of filling these vacant suffragan sees, the more so as from yesterday a male only shortlist is hardly appropriate going forward. Dunwich is presumably on hold until the new diocesan is named; Plymouth (the longest vacancy) is presumably also complicated by Exeter having a new diocesan and may be considered also to have the special characteristic of a history of traditionalist bishops. Stockport is… Read more »

At a meeting to discuss the legislation in Chester diocese, I asked the Bp of Chester if they were going to delay, I got the impression he wanted to hurry with the Stockport appointment but he didn’t commit himself. Maybe he also has certain con evo parishes in this half of the diocese breathing down his neck?

If the Bishop of Chester shortlisted and made the decision before 17 November then I will let him off!

Shouldn’t Grantham now be added to the list of vacant suffragans as it seems from what has been written on the Lincoln Diocesan website to have been restored? I’ll wager a shilling that the next + Grantham will definitely be a woman.

The last Bishop of Plymouth was “traditionalist” but neither of the two previous ones.