Today is the 850th anniversary of the martyrdom of Thomas Becket, Archbishop of Canterbury, at the hands of four of King Henry II’s knights. To mark the date we republish a piece that we originally published on this day in 2007. 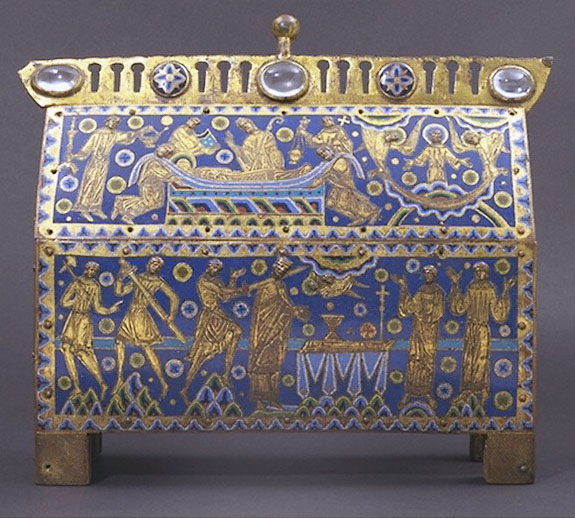 So wrote T S Eliot at the start of the second act of his play Murder in the Cathedral, written for the 1935 Canterbury Festival, and first performed in the Chapter House at Canterbury, just a few yards from where, on this day in 1170, the Archbishop of Canterbury, Thomas Becket, was killed.

The murder, or assassination, of Thomas Becket within his cathedral church shocked the whole of western Christendom. Within three years he had been canonized, his name added to the roll of saints of the Church, and King Henry II forced to do penance for his role in Becket’s death. From Iceland to Italy there are churches dedicated to St Thomas of Canterbury, and relics, statues and images from just a few years after 1170.

The cause for which Becket died, however, is not one that today we necessarily regard as unambiguously right. As Eliot has the assassins remind his audience, the rule of law that we treasure as a great protection was begun by the reforms of Henry II that Becket stood against. ‘Remember,’ says the Second Knight in his speech to the audience, ‘remember that it is we who took the first step. We have been instrumental in bringing about the state of affairs that you approve.’ On the other hand, the rule of law that Henry II was introducing was harsh, whereas the rule of the Church, which Becket wanted to encompass as many people as possible, was more lenient.

And yet we cannot easily regard the murder of Becket as justified, even if we can agree with some of the sentiments Eliot has the knights express. The end does not justify the means. The powerful cannot go around murdering those they disagree with, whether they be political rivals or obstacles (as Becket had become to Henry II), or the weak and impoverished (as the boys of Bethlehem were to Herod, or indeed today). The prophets of the Old Testament remind us of this too: we see David brought to book by Nathan for arranging the death of Uriah, the husband of Bathsheba (2 Samuel 11, 12); and Elijah foretells disaster on the house of Ahab for his complicity in bearing false witness against Naboth and causing him to be executed (1 Kings 21); and there are plenty of other examples.

The very rule of law that Henry II wanted to introduce requires that arbitrary exercise of power is not allowed. The murder of Thomas Becket reminds us still that the rule of law (tempered by equity and mercy) is fundamental to the Judaeo-Christian tradition, and that it applies as much if not more to the rich and powerful and to the rulers as it does to the dispossessed, the powerless and the ruled. Those in power must always be held to account for their treatment of those who are in their power.

‘To-day, what is to-day?’
‘Let our thanks ascend
To God, who has given us another Saint in Canterbury.’
‘Blessed Thomas, pray for us.’

Simon Kershaw is Lay Chair of the Ely diocesan synod and a lay canon of Ely Cathedral. He was also a founder member of the TS Eliot Society in 2006.

One of the benefits of this period of time is that Canterbury has been very generous in putting their services on line. This morning at Morning Prayer we thought of Thomas, and Dean in his reflections spoke of Murder in the Cathedral.
At 5.30 this evening Vespers is broadcast on line.

I have been using the services from some of the Cambridge colleges. Clare College for example

This link is pretty astonishing – https://www.whitehouse.gov/presidential-actions/proclamation-850th-anniversary-martyrdom-saint-thomas-becket/

Of course, what this proclamation misses is the other side of the coin: If Becket had prevailed, the secular state would not exist, and government would be subservient to the church.

Further, I’m not sure that such a proclamation is not a violation of the US Constitution’s First Amendment, prohibiting the preferment of one religion over another.

Pat O’Neill, suffice it to say you struck a nerve with me and highlighted one of my pet peeves. Thinking Anglicans is not a political website and I respect that. However, in my opinion, President Donald Trump did not issue this out of any devotion to the memory or actions of Thomas Becket, but rather out of devotion to keeping his religious base on board. On one hand, in my opinion, President Trump has no known moral code, no known religious belief or affiliation, and therefore any religious proclamation is not out of spiritual piety. On the other hand, thanks… Read more »

Two interesting reactions from the US from Pat O’Neill and peterpi – Peter Gross. But, firstly, I’m not at all certain that President Trump is correct in asserting that Henry II ordered the death of Thomas à Becket, quoting the President’s words “had him killed”. What Henry II said, as has come down through the ages, about the ‘turbulent priest’ does not go anywhere as far as that. But is President Trump’s proclamation biased in favour of Christianity? I read it differently as upholding the American belief in the freedom to exercise religion irrespective of different faiths or denominations. The… Read more »

“whereas the rule of the Church, which Becket wanted to encompass as many people as possible, was more lenient.” Unless one was Jewish, or polytheist, or atheist, or didn’t believe in the “correct form” of Christianity (Roman Catholicism as dictated by the pope of the day). To my knowledge, historians still debate whether King Henry II “intended” the death of Thomas Becket, or was frustrated as Hell. Putting all the blame solely on the murderers is convenient and expedient. But I agree with Mr. Kershaw that King Henry’s overall actions brought us closer to the day of a secular state… Read more »

Power hasn’t changed much in 850 years, it seems to me. Instead of a King, the Queen is the Supreme Governor of the Church of England.