on Friday, 8 July 2022 at 6.18 pm by Simon Sarmiento
categorised as Church of England, News

The Metropolitan Police has confirmed that Martin Sargeant, former Head of Operations in the Two Cities, has been charged with fraud and money-laundering, dating back to between 2009 and 2019. Mr Sargeant left the Diocese in 2019, following a review of his role instigated by the new Bishop of London, Sarah Mullally. At the time there was no suspicion or evidence of criminality but, last year, the London Diocesan Fund (LDF) made a report to the Action Fraud unit of the Police, and a serious incident report to the Charity Commission, after a parish raised concerns about funds they had not received.

Over the past year, the LDF has worked closely to support the Police and to maintain the confidential, sensitive nature of their complex investigation at the Police’s request. Trustees of the LDF were first informed on a confidential basis, with permission of the Police, earlier this year. Any church or other organisation known to be relevant to these enquiries has already been approached as part of the investigation. The fraud is historic in nature, and does not relate to Common Fund or the present day funding of parishes. The Police’s work has involved extensive analysis of financial records relating to both the Diocese and the individual over a long period and the securing of a court order to freeze the individual’s assets. The total sum of money involved is believed to be in the region of £5m, affecting a number of different organisations.

“Following the reporting of our concerns to the Police, our priority has been to support their work, and to do all we can to secure the defrauded funds. Our independent auditors have also carried out an urgent review of our present-day financial controls, to confirm they are robust. A second independent inquiry will report to the London Diocesan Fund’s trustees and look at what happened and how, and will make any further recommendations for the future, once the current case has been closed.”

“This appears to be a gross betrayal of trust for all those who knew and worked with this individual. After I came to the Diocese in 2018, his role was reviewed and he left the following year. While there was no evidence of anything inappropriate at the time, with the further information that has subsequently been uncovered, it now seems he exploited his position for personal gain.

“I want to thank the Police, and the London Diocesan Fund’s financial team, for their work over the past year, as they continue to investigate the extent of this complex fraud that was perpetuated over a decade.”

The LDF continues to support the Police with their investigation but will not be able to comment further publicly at this time.

So this is the same guy who “brain dumped” about Fr Alan Griffin?

A Menage
Reply to  Fr Tom

Yep!! A truly vicious individual it appears. A certain Bishop blind as a bat then! And with cloth ears!

GS2234 states that, in 2019, London diocese had DSF capital of about £69.5m. Assuming that the £5m was spread amongst entities falling under the umbrella of the DBF/LDF, it is surprising that such a large fraud (of c. 7% of the ostensible available assets) was not discovered for so long. I am struggling to comprehend how the trustees of the LDF and their auditors (whom I believe are, or were, Mazars) took such a long time to identify these irregularities. Struggling parishes (and there a good many in London diocese, some of which are in UPAs) have to make considerable… Read more »

I think your final point is significant here. At a parish level I have observed that the more people who are involved in something the less clear it is who is actually responsible for what. Fewer officers with more clearly defined responsibilities must be a way to ensure greater transparency.

It will take a long time before these questions are answered. The Diocese has announced an independent inquiry after the court case is concluded. Until then, it must be said, Mr Sargeant is entitled to the presumption of innocence and it would be damaging to speculate on what might or might not have gone wrong. Being a fraud case, it will take time before that inquiry can even begin. However, there is one thing I think worth commenting on now, which does not bear on the court case. Our independent auditors have also carried out an urgent review of our… Read more »

Many thanks. I agree completely with the presumption of innocence and that the burden of proof is with the prosecution. The distinction you make is apt, since to confirm robustness after the event is to recognise the closure of the stable door, long after the horse has bolted over the hill. For me, the issue is why the auditors took so long to identify any irregularities (assuming it was they who made the identification). Presumably the review was undertaken by a different firm of auditors, and that part of their brief was to assess the quality of the audits which… Read more »

I served as an elected lay member of the Bishop’s Council and the London Diocesan Synod when Martin Sargeant’s powers were at their height. Haysmacintyyre were the auditors. But I understand that Martin Sargeant has been accused of defrauding several organisations and I do not know if the LDF itself is one of them. When I was on the Bishop’s Council, all the real business was done by the senior clergy and senior staff. Although the Council members are the charity trustees of the diocese, we were hardly ever invited to discuss anything that the senior clergy wanted to keep… Read more »

Many thanks indeed for that. I tried to look up the accounts yesterday and, unfortunately, the downloads for the last few years failed to open. The most recent set of accounts for the LDF which I found were from more than a decade ago, and Mazars was stated as being the then auditor. I appreciate that a different firm may have been used since then. The accounts which I did see indicated that there were a substantial number of trustees, which I am not certain is healthy (an excessive number of trustees or company directors often portends a poorly managed… Read more »

I found the accounts for the last five years on the Charity Commission website – click on “Accounts and annual returns”.

They are also available (back to 1994) on the Companies House website.

Many thanks for that! I have kept getting ‘download failed’ for PDFs, but I have now accessed the accounts via a different computer, and I see that the LDF’s 2021 assets were £516m, meaning that the £5m, whilst significant, is a far smaller proportion of the aggregate assets than supposed by GS2234. This is considerably greater than the amount detailed in GS2234, and makes me wonder if the wealth of the dioceses is really rather greater than that document indicates (which is good!). There are still more than 50 trustees! I also see that Haysmacintyre are the auditors, and their… Read more »

The figure in GS2234 is the Diocesan Stipends Fund Capital. Diocesan total assets will include other things, for example the capital value of parsonage houses.

Many thanks. I had read it as being the funds for each diocese which could be used for pay and rations, and which were mostly consolidated glebe assets: hence the radical differences between supposedly well-endowed dioceses like Lincoln and London, and ‘poor’ dioceses like Canterbury and Liverpool. However, if London has assets vastly in excess of its erstwhile glebe, etc., then I would guess that this points to a lot of other wealth being possessed by at least some dioceses. People like Guy Shrubsole have asked what happened to the Church’s landed wealth, supposing that freehold incumbents sold it (I… Read more »

I’ve been looking at the LDF finance report’s audit and risk assessment. For years, this section has remained the same. I attach a screen shot: the one risk that doesn’t figure at all (perhaps that might change) is the possibility that an employee might, just possibly, be trousering huge sums in the hope that no one will notice. 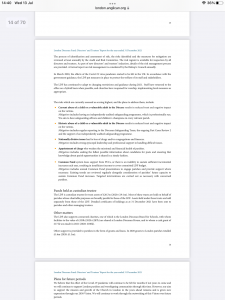 Strange how these things move in such tight circles. The Museum of the Bible came to my attention when they were keen to acquire some papyrus fragments apparently bearing very early written portions of the Gospels. They purchased them from Professor Dirk Obbink, who was subsequently arrested on charges of having stolen the fragments from an Oxford University museum (where they had been deposited on loan from the Egypt Exploration Society). To do them credit, the Bible Museum returned the fragments to Oxford, and undertook, and won, a civil court case against Prof Obbink for the return of the several… Read more »

I’m perhaps naïve but as Froghole and Margery Roberts have highlighted £5m is an awful lot of money to go missing and not be spotted by the auditors. Do auditors have a professional body to whom a complaint could be made?

Fr. Dean: the ICAEW is the professional body and de facto trade association. They are a regulated profession, under the Financial Reporting Council: https://www.gov.uk/government/organisations/financial-reporting-council#:~:text=The%20Financial%20Reporting%20Council%20(FRC,Corporate%20Governance%20and%20Stewardship%20Codes.

I, too, am astonished by the figure of £5m and the fact that the alleged fraud went undetected for so long. Far from being ‘robust’ the financial controls must have been inadequate, bordering on non-existent. I worked for several years implementing the disciplinary process re employees who had attempted internal fraud within one of the well-known High Street banks. Procedures have to be in place to detect fraud quickly – there were audit controls that the staff and managers all knew about and an additional set that were not widely known – an element of surprise in the audit process… Read more »

“I realise that this may not appear to be a very Christian approach…” On the contrary. Key to our faith is the recognition that we are all prone to temptation. That is why we need the grace of God. It is also why we need to be prepared to ask awkward questions even of our most exalted leaders.

Questions will also be asked regarding the trustees’ own Audit and Risk Committee. I note that Mr Parry’s statement did not address any actions that the trustees might take to identify weaknesses in the internal audit and risk assessment function, to assure themselves that it was currently fit for purpose, or to take steps to strengthen it. To quote the Charity Commission guidance on this subject: It is a duty of the charity trustees to ensure that the charity’s resources are protected in order that the charity can fulfil its aims. It is important that all those working in the… Read more »

I am not going to comment on the detail of the case, or the person charged with the offences, as it is the task of the Courts to determine whether offences have been committed. It is after a guilty verdict has been delivered that the statement by the Bishop of London should have been released. Clearly, she has already decided that he is guilty. Just another indicator that bishops are a law unto themselves.

It’s pretty staggering when people seem unaware that publishing adverse and prejudicial comment before (or during) a criminal trial can be contempt of court.

I suspect some funds in eg the Archdeacon’s account are not technically subject to any review by independent auditors at all since they are unlikely to be deemed to be held by LDF or by LDF as trustee and the sums may be too small for the individual sets of trustees- if indeed they could be found- to be required to have them certified.