Independent Safeguarding Board: a recap

on Monday, 20 June 2022 at 2.33 pm by Simon Sarmiento
categorised as Church of England, General Synod, Safeguarding

This article summarises the various steps taken in the course of creating this new Church of England body.

On 15 December 2020, the Archbishops’ Council issued a press release, as we reported here: Independent oversight of safeguarding proposed.

On 25 February 2021, the Archbishops’ Council issued another press release, reported here as Proposals on NST independent oversight published which links to a lengthy paper authored by Malcolm Brown and brought to the February 2021 General Synod.

Appointments to the ISB were announced:

Although the Archbishops’ Council reported that the ISB proposal was included in their agenda, first here (para 3), and then here (para 7) nothing else was announced until February 2022. We then reported: Recent Church of England Safeguarding reports. This links to GS 2244 which includes as an Annex (starts on page 11 of the PDF)  the first report from the Chair of the newly constituted Independent Safeguarding Board. This is worth reading carefully.

The same article also links to Gavin Drake’s follow-on motion which you can read in full here.

The Church Times reported on what happened in debate:

And then on 26 May, this press release came from the Church of England which we reported as Christ Church safeguarding review. It links to the full text of the Terms of Reference for that review.

For an understanding of how the Diocese of Oxford views this review, see this extract from June 2022 Oxford Diocesan Synod Questions.

For information about the objections that have been raised to this review, see:

How has the ISB been roped in to review arguably the most complex situation of inter-organisational corruption seen across the Church in recent years? Archbishops’ Council seem desperate to clear their desk of the Oxford scandal and have pushed it into the hands of an untried embryonic group with no experience of leading an inquiry and certainly not of this scale and magnitude. Maggie Atkinson, ISB Chair, speaking at Synod on 9th February could not have been clearer: https://youtu.be/8yY5-SGcpto 1.37.33 ff “You will know [from Pagraph 6 of our report] that we do not have a re-investigative, reviewing, instigating, insisting,… Read more » 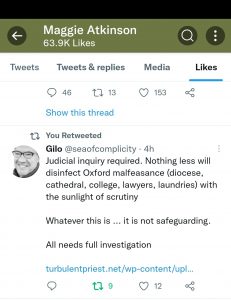 Am I misunderstanding something, Gilo? I thought the tasking of the ISB was not to adjudicate but to take an overview of the processes involved with this case, and then report back, with suggestions to the Church of England of what could be done better in future cases. I agree with you that a judicial review, and a review by the Charity Commission, should be carried out to look in great detail at every step of what has probably been a 5-year journey of events. However, my understanding was that ISB has been instructed only to review a limited period,… Read more »

That would also cover the accusations against the then Dean made by the Governing Body in March 2020 to the NST, of failing to handle historical safeguarding issues correctly: of which Percy was cleared in September 2020. This was the case where the “wily censors”, that is, representatives of the accusers, were initially allowed to sit on the Core Team adjudicating the matter.

Susannah, I think all is explained on the thread immediately below this one “Independent Safeguarding Board and the Percy review”. There is, as yet, no certainty that any judicial-type review will happen. The Charity Commission, as I understand, is only concerned with Christ Church as a registered charity, and has no involvement with the C of E’s direct part in these matters. In a way it’s unfortunate (although inevitable) that there are to be separate reviews by the C of E and Ch Ch as there are matters, and personnel, which overlap. Martyn Percy’s request for a judicial-type review by… Read more »

Here’s the link
https://archbishopcranmer.com/the-cofe-independent-safeguarding-board-a-review/
The appendix at the end contains quotes from a letter to Martyn Percy from the archbishops, plus comments thereon from Martin Sewell. This is very important material to read.

If there is already considerable overlap between the two separate reviews, then why is yet another (judicial-type) review needed? It just keeps lawyers in business while being of little conceivable benefit to the Church or University. The archbishops are quite right to quash it, in my view.

My reference to the overlap would, unfortunately, mean that significant matters falling within the C of E remit simply won’t surface. The C of E review is not making findings of fact or allocating blame. I specifically had in mind the episode helpfully summarised in Unreliable Narrator’s comment above. My understanding is that these were members of the Governing Body (whether or not ordained) but, as a C of E matter, culpability for this episode is unlikely to figure in either report. Martin Sewell, in answer to Susannah, refers to a whole raft of other irregularities. One, and a very… Read more »

Fair questions Susannah. Of course the ISB cannot attempt to adjudicate: it would have been quite wrong to even consider attempting it, not least because it possesses no powers to compel disclosure and testimony. If it does not carry the confidence of all, they will not engage and it will be a waste of time and resource. Unfortunately this old refrain of “we will learn how to do this better next time” is part of the problem. I give you a simple example from the secular Safeguarding Courts in which I practiced where, since the Maria Colwell case in 1979,… Read more »

Thanks Martin for a most comprehensive response, and everyone who kindly responded to my question. “The Percy case needs inquiry of the highest calibre, experience, depth and independence.” I totally agree. Maud: “why is yet another (judicial-type) review needed? It just keeps lawyers in business while being of little conceivable benefit to the Church or University.” Respectfully Maud, Church and University are not the only parties with interests in an in-depth, professional and independent inquiry. The individual on the receiving end of highly questionable actions BY the Church and University also deserves these events to be scrutinised. My main question… Read more »

Allow me to predict the result of this Review. The review will only look at the paper trail, and decide whether or not procedures have been correctly followed and documented. It will not look at the contents of those papers, and decide whether or not those contents are true or fair: and it will not look at the truth or fairness of the decisions made beyond asking whether they were taken in accordance with process. It will not address questions such as whether the “wily” Censors of Christ Church, as complainant against Martyn Percy, should have been represented on an… Read more »